(This article is as spoiler-free as possible. Read on!)

Though I am not easily bored, I do know that feeling of emptiness that sometimes gets a hold of you when there are pressing matters you can do little about.
Most activities cannot do much to keep those negative thoughts at bay.
Although, perhaps, the contrary should be done.

Fighting fire with fire has been a trend since the times of Shakespeare, but when it comes to negative emotions, the old Greeks had already come up with this exquisite concept called catharsis.

I think they used to say something like:
“Are you sad? Go cry your heart out attending the saddest tragedy on show – I heard there is a new play by this Euripides guy that’s absolutely lit, you should totally watch it!”.

So, are you worried sick in these times of quarantine? Does the world seem like it’s going to end?[1]

If what I said resonates, then it might be the right time to read or re-read four great pieces of literature from a different point of view, since our understanding and appreciation of them should have been enhanced.
The list that follows is partly composed of books I have read and books I would like to read[2].
I have also tried to avoid very obvious titles[3] which have been included in many other similar lists on the internet to keep it original.

Let’s start with Thucydides.
Okay, I admit the old man may not be to everyone’s taste, unless you own a very good translation and have a taste for ancient classics, but believe me, he’s just so good.
When I finished reading The Peloponnesian Wars, I couldn’t be more disappointed for the fact that it did not have an ending of its own, and that his disciple Xenophon had written a half-hearted one for it in his book.
The battles and the choices, the betrayals and the honourable actions of leaders and warriors alike are here illustrated in a manner which is somewhat reminiscent of the Homeric epics. Still, their more realistic depiction makes us discover the several humane aspects of these figures, and how they influenced the fate of the ancient world. 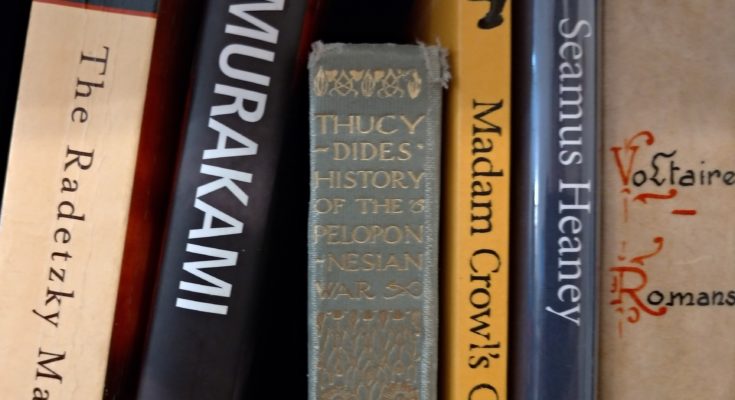 You could be tempted to only read the passage describing the plague in Athens, which is amazing of course, but let us face it again: you have a lot of time.
Do not find excuses not to read or revisit one of the greatest historical works ever, also because of the many great speeches. You will realise that the art of politics hasn’t changed much in a couple millennia, both for the better and for the worse.
I personally read the translation of Richard Crawley, published by Dent for the Everyman series, but you could easily opt for a newer rendition if you think you are easily bored.

Next, The Last Man, by Mary Shelley.
That’s right, our favourite monster-maker focused on another of the great sci-fi themes which would be so popular from the 20th century onward: the end of the world.
Guess what? It ended due to a plague.
Now now, do not be afraid! It is true that Mary Shelley said that she wrote the novel by taking inspiration from ‘a collection of prophetic writings painted on leaves by the Cumaean Sibyl in a cave near Naples’, but it actually takes place in 2073, so we have a few years yet[4] 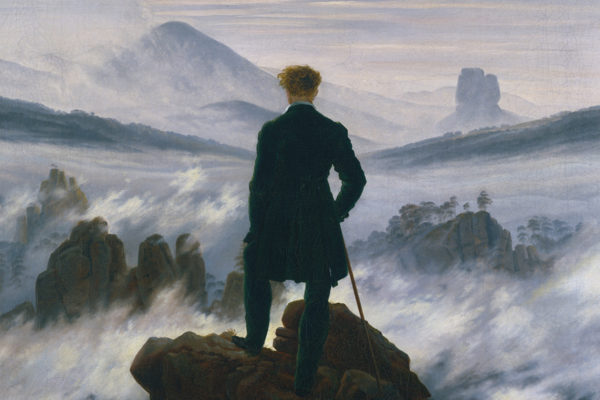 [Wanderer above the sea of fog  by Caspar David Friedrich (1774-1840) has often been used as cover art for this novel.]

Jokes aside, the novel has many literary merits of its own, above all the fact that its contemporaries called it ugly and cruel. If you know what kind of corrections Mary had to make to the first publication of Frankenstein, you know what the Victorians-to-be could not bear to read, and you will be instantly attracted to these themes. It might also provide you with some insight as to what you should be feeling in case you were the last human alive on Earth[5].

Next on the list, another post-apocalyptic read: I Am Legend, by Richard Matheson.
I know you’ve watched that brilliant film with Will Smith like four times, haven’t you?
I have, and it’s still great, and I am not crying for that scene anymore, no.
Well yes, but I do not tell people, usually.
Anyhow, I recently received the most significant recommendation to read this book as soon as I can from my former boss. He HATES sci-fi, and has only focused on reading classics for some thirty years, but somehow, he has read this and loved it.

Whilst I haven’t got my hands on it yet, I know that the book takes a slower road to explain all of the protagonist’s, Robert Neville, mental condition, which is due to the extreme solitude. I will not share with you the small spoilers which I forced myself to read to write this article, but let me say that the novel is going to be a lot lonelier and profounder, if you will, since it can confront themes in a way which would be far too boring in a film, while terribly intense in written form.
To those who are not familiar with the setting, however unlikely this is, I can tell you that the world ended in this case due to a vampiric-like plague, which made it quite a bit more dramatic than all of us having to stay at home for so long.

Last but not least: The Betrothed by Alessandro Manzoni.
Did you think you could finish reading this article without me showing off something as to my Italian heritage?
Of course not. But I am absolutely not off-theme, you will see.
Anyway, most younger people in Italy actually hate this novel, for the simple reasons that it is “taught” at school and written in a language which is more than 150 years old, making it difficult to understand for someone who is not interested or acquainted with it.
That’s where you English readers come into play: you can easily enjoy a translation without any prejudices, and it is absolutely worth doing it.
The Betrothed has all the major perks of a 19th century masterpiece: solid historical background, major tragic events, a love story, class fights, faith, conspiracies and an unforgettable cast of characters which includes some of the funniest and most menacing you will ever read of.
You might still be wondering why I am recommending it, though.
Well, an entire chapter of the novel describes the outbreak of the plague in Italy in 1630, and many of the passages are tragically similar to events we’ve surely heard of in the news these days. The event itself is quite relevant to the plot, but the author takes great care into relating it truthfully, by extracting material from historical sources[6]. The result is a masterful exposition that will make you both too shocked and too intrigued to stop reading. 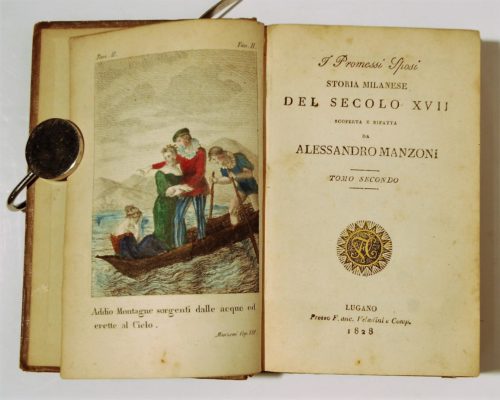 [This copy of The Betrothed, in Italian, belonged to the Rossetti family, and is available on our website.]

There is also a small non-intended Easter Egg for Harry Potter fans here, as one of the villains of the novel is l’Innominato, that is, He-who-must-not-be-named.
Have I got your attention now?

Thank you so much for reading! I think it important to converse about these themes, but being brave also means that we should not be overcome by their weight, and it is therefore our duty to support each other by sometimes making fun of it, and by making its discussion interesting.
And what about you, fellow readers? Would you like to recommend us some books? Have you already read any of these titles? What do you think about the recent outbreak of CoVid-19 in connection to literature and the book industry? Feedback is more than welcome on our social media accounts.

[1] You optimists! It is quite unlikely, we’ve survived worse.
[2] I am looking at you, my old copy of The last man which I, alas, forgot to take here with me from Italy three years ago.
[3] Albert Camus does not like this post.
[4] Also, the setting is oddly similar, for costumes and tradition, to that of her times. Maybe the Georgian/pre-Victorian style is making a comeback in fashion later this century?
[5] I haven’t finished it, though, so I must admit I am not sure of this since people were still alive until when I had to stop due to the aformentioned reasons.
[6] He has even written a separate piece on the subject, The Column of Infamy, which I totally recommend of course, but I am trying to get you more entertained than informed, and that’s why it doesn’t figure in my list.