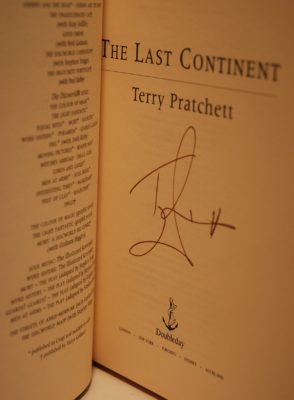 Here at Henry Pordes Books we pride ourselves on stocking not just the old and antiquarian – although our stock of such books is certainly many and varied; we also hold a wide array of modern favourites. Recently, we acquired a large selection of first edition Terry Pratchett novels, a few of which are signed by the late author. From his critically acclaimed Discworld series, for example, you can find the twenty-second instalment, ‘The Last Continent’, in its first English edition, signed with Pratchett’s distinctive flourish. This complex satire, both a mockery of the time travel genre and a parody of Australian culture, unravels at rapid pace and was released to widespread praise. In near-fine condition, it would make a wonderful centrepiece to an enthusiast’s collection. With Pratchett and Neil Gaiman’s ‘Good Omens’ adapted as an Amazon series this summer, we have stocked up our used paperback section, and you can now find plenty of reading copies of this much-loved novel. 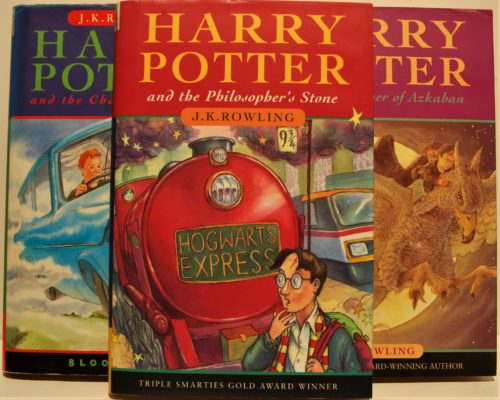 Sitting so close to the Phoenix Theatre, which currently houses the stage production of J. K. Rowling’s ‘Cursed Child’, we often welcome the curious tourist or two in search of early editions of the Harry Potter novels. Adorning our window display and also sitting within their own section of our fiction collection, the Rowling enthusiast can pick up one of the collectable British editions of ‘The Philosopher’s Stone’, ‘The Chamber of Secrets’, ‘The Prisoner of Azkaban’, and the rest of the series, each with their original artwork and textual peculiarities. We often have first editions of some of the later volumes, such as ‘The Half-Blood Prince’ and ‘The Deathly Hallows’, or if you are looking to add something really special to your reading shelves, why not ask to see some of our rare, early printed hardbacks?

For readers looking less at the fantastical and instead for a fright, we’ve

recently stocked up on Stephen King. In our paperback section you’ll find reading copies of some of King’s more recent best sellers, but for the collector out there, we hold a first English edition of his horror novel ‘IT’, which follows seven children as they are terrorised by an evil being that feeds on their fears and phobias. Published to widespread acclaim and subsequently adapted for the screen in 1990, again in 2017, our near-fine copy by Hodder & Stoughton takes pride of place alongside another King first English edition recently adapted for the big screen, ‘Pet Sematary’.