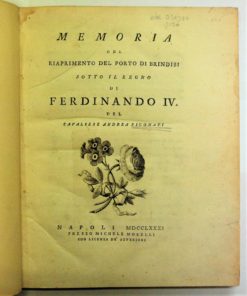 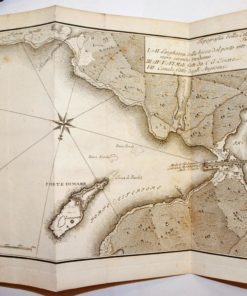 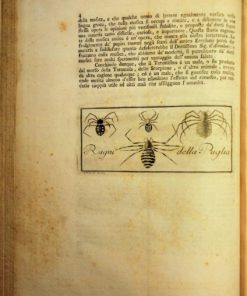 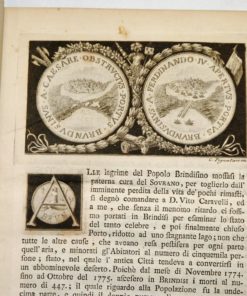 4to., disbound, pp. [8], 76, 4, with an elaborate printer’s colophon to title page (two intertwined flowers), 1 elaborate decorated initial, 1 header with the recto and verso of a coin on which are two views of Brindisi, one with and one without the waterway to the city, the first reading: ‘A CAESARE OBSTRVCTVS PORTVS BRVNDVSINVS’, the other with: ‘A FERDINANDO IV APERTVS PORTVS BRVNDVSINVS’ (implying that under Caesar the way was landlocked, whereas under Ferdinand it was open); 1 trailing illustration of ‘Ragni della Puglia’; 1 large folding plate with a view of Brindisi; all copper-engraved. The coin and the map were engraved by Carmelo Pignatari, and the ‘Ragni di Puglia’ by Benedetto Cimarelli, both of whom were prominent engravers working in Southern Italy in the late eighteenth century. An important first edition commemorating the opening of a canal facilitating movement within the port of Brindisi, the construction of which the Bourbon king Ferdinand IV commissioned from the engineer Andrea Pigonati, the author of this book. Despite being disbound the book is in very good condition. However, it is LACKING 1 folding plate and has a library stamp on the verso of the title page. Text in Italian.

Otis, George A., A REPORT ON AMPUTATIONS AT THE HIP-JOINT in Military Surgery, Government Printing Office 1867

Simms, Frederick W., A Treatise on the Principal Mathematical Instruments Employed in Surveing, Leveling, and Astronomy, Messrs, Throughton and Simms 1844